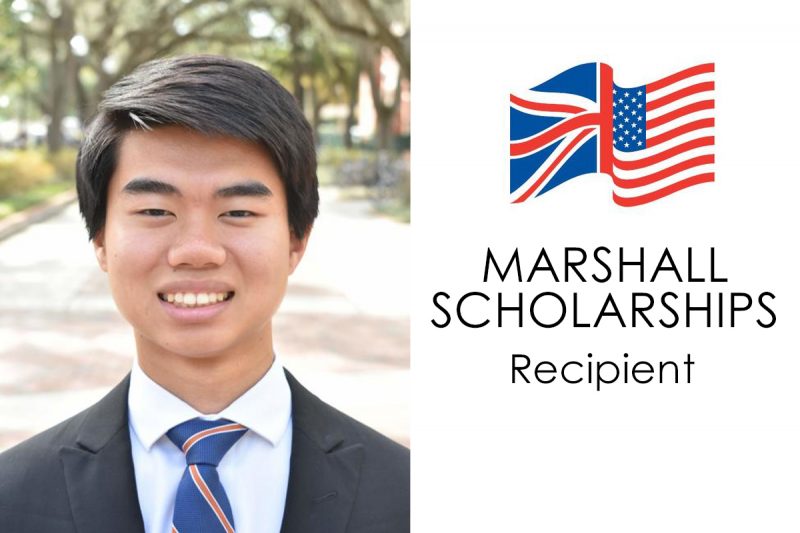 A University of Florida senior has been selected for the prestigious Marshall Scholarship, an award given to outstanding American students to pursue graduate studies in the United Kingdom.

Aaron Sandoval, a biology major in UF’s Honors Program, is the second UF student to receive the award. He is one of 46 students selected from more than 1,000 applicants to receive the scholarship.

Sandoval will go to the University of Cambridge’s Master of Philosophy program to study biological sciences. After, he will pursue a Master of Science at King’s College London to study how stem cell and regenerative therapies make it from the lab to the market.

“Aaron demonstrates remarkable initiative, especially in his ability to seek mentorship and build strong relationships with faculty outside the classroom,” said UF Honors Program Director Mark Law. “His collaboration with Dr. Keith March, director of the Center for Regenerative Medicine, led to the Honors Program offering two new seminars for our students.”

Sandoval’s partnership with March came after a summer researching axolotl salamander limb and mouse digit regeneration at the Harvard Stem Cell Institute. The two worked together to develop a new undergraduate program in regenerative medicine after seeing an academic need and high student interest.

Leaning in to these kinds of faculty collaborations is not new to Sandoval. For the last four years, he has worked as an undergraduate researcher with professor Malcolm Maden in UF’s Cancer and Genetics Research Institute.

“He’s going to be impossible to replace,” Maden said. “This guy had rockets on his shoes right from day one—a class above—and his shoes will never be filled. But his success is so rewarding from my point of view.”

Before coming to UF, Maden was a professor of developmental biology at King’s College London, where Sandoval will spend his second year.

“The decision to join Dr. Maden’s lab as a freshman has been the single most impactful choice I’ve ever made in my life,” Sandoval said. “If I could go back in time and do this all over again, I would choose his lab every single time.”

Last year, the biology student earned a Goldwater Scholarship, an award given to those in the natural sciences, engineering and mathematics in the United States. The scholarship seeks out students who show promise to lead the next generation of research in their respective fields.

Sandoval hopes to become a physician-scientist and advance the field of regenerative medicine. He joins a diverse array of students pursuing graduate degrees across disciplines in the United Kingdom through the Marshall Scholarship.

Named for Secretary of State George C. Marshall, the Marshall Scholarship Program began in 1953 as a gesture of gratitude to the people of the United States for the assistance that the U.K. received after World War II under the Marshall Plan. Prominent alumni include Supreme Court Justice Stephen Breyer, Pulitzer Prize-winning author Anne Applebaum, inventor Ray Dolby and former U.S. Secretary of the Interior Bruce Babbitt.