Malaria is a devastating vector-borne disease caused by parasites of the genus Plasmodium, which causes roughly 435,000 deaths a year, predominantly children under the age of five in sub-Saharan Africa. Malarial parasites have a complex life-cycle requiring development in their mosquito vector of the genus Anopheles. Despite progress over the past decade towards malaria eradication, progress has stalled, and novel approaches to eradication are needed. Transmission-blocking vaccines work by preventing the development of malarial parasites within the mosquito vector, thereby blocking transmission. Antibodies raised against the mosquito midgut protein Anopheline Alanyl aminopeptidase N (AnAPN1) in animals have been shown to block ookinete stage parasites from traversing the mosquito midgut epithelium, blocking transmission. By solving the crystal structure of AnAPN1, important transmission-blocking (T-B) epitopes (peptides 7 and 9) and a decoy epitope (peptide 1) were found. To immunofocus the humoral response to these epitopes and increase T-B activity, a dimer was constructed lacking the decoy epitope and containing the key T-B epitopes. Here, we evaluated this new AnAPN1 immunogen with a human safe adjuvant, GLA-LSQ, in a mouse model and found it to be highly immunogenic and able to immunofocus the immune response to peptide 9, resulting in potent T-B capability. 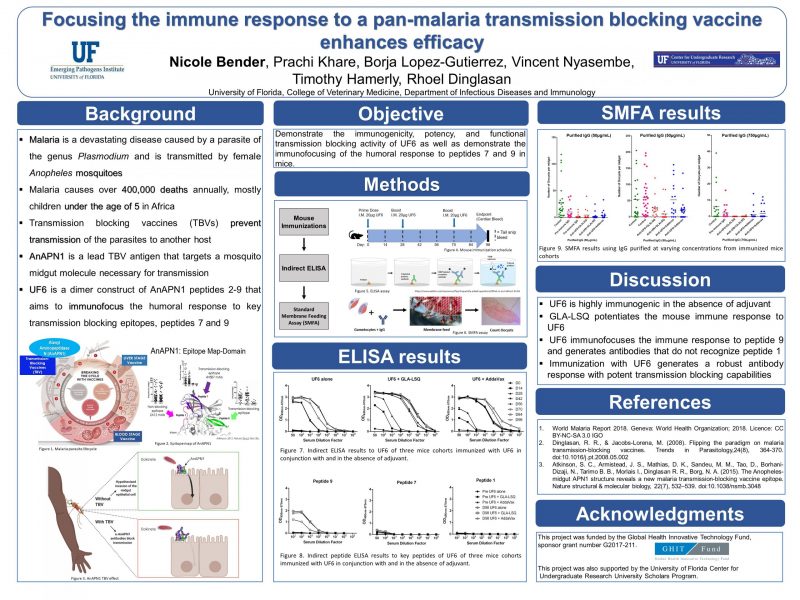