Instability of repetitive DNA sequences causes several diseases, including the progressive multisystemic disorder myotonic dystrophy type 1 (DM1). DM1 symptoms range in severity from muscle weakness and wasting to respiratory insufficiency and premature death, and worsen with age. Thus far, no animal models have successfully recapitulated the multisystemic nature of DM1, nor recreated the genetic basis of DM1. Our goal was to generate and assess mouse models with expanded CTG sequences in the gene Dmpk—as in humans with DM1—in order to investigate the disease’s pathogenesis. Dmpk CTGexp knockin mouse models have been generated, including lines with 170 or 480 uninterrupted CTG repeats. We demonstrate that cells involved in skeletal muscle formation and cerebrospinal fluid (CSF) secretion are especially sensitive to perturbation by Dmpk CTGexp and RNA mis-splicing, suggesting that a- or pre- symptomatic DM1 patients may display signs of dysregulated muscle regeneration and impaired CSF homeostasis. Many of the top splicing changes were previously characterized in DM1 patients’ samples. Our results support Dmpk CTGexp knockin as a model for DM1, and work is underway to create longer repeat expansion knockins to better study DM1 pathogenesis. 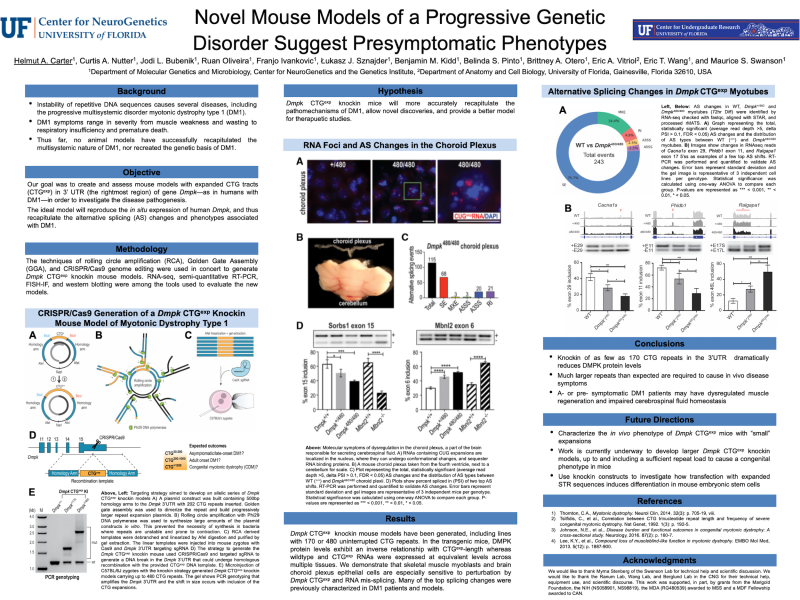 I have a couple of questions: 1) What is the significance of using Sorbs1 in your study and 2) do people with DM1 show “brain sag” or intracranial hypotension?

Excellent questions Jada! Sorbs1 is a splicing target for MBNL 1, the loss of function of which plays a major role in DM1 pathogenesis. Sorbs1 is a biomarker for DM1, and it functions in insulin signalling which can be impaired in DM1 patients. It specifically was chosen as opposed to any other splicing event because it showed a clear, strong shift in splicing, perfect for a figure.

Intracranial hypotension is not known to be associated with DM1. In fact, DM1 patients produce more CSF than healthy people as a result of having enlarged ventricles. I would say that intracranial hypotension isn’t really a concern because dysregulation of the choroid plexus isn’t manifesting as a change in volume produced, but in changes to the composition of the CSF. One specific mechanism for this we are currently investigating is the role of micro RNAs in the CSF, and how they are affected by DM1.

Thanks so much Dr. Guryanova! Your mice used to share a room with the mice used in this project 🙂