Oral and Pharyngeal Cancer (OPC) is a deadly cancer with complex treatment plans and outcomes. In practice, surgery followed by radiation or chemotherapy is considered the “optimal treatment” associated with better OPC survival. However, not all OPC patients receive the optimal treatment. Prior research has documented that survival varies by smoking status and ethno-racial groups, but little is known about the relationship between a patient’s smoking status, ethnicity, and the choices they make about cancer treatment post diagnosis. To shed light on this under-studied issue, data from the Florida Cancer Data System were analyzed. A logit model was built with the response variable treatment pattern arranged into three levels: surgery only (reference), surgery followed by radiation or chemotherapy, and other treatment types. The predictors included smoking status, race-ethnicity, smoking by race-ethnicity interaction, health insurance, age at diagnosis, gender, and marital status. Overall, the odds of receiving optimal treatment for Non-Hispanic Whites and Non-Hispanic Blacks are 29%-34% (p<0.001) greater than the odds of optimal treatment for Hispanics. One significant smoking by race-ethnicity interaction was found between Non-Hispanic Blacks and current smoking status, making Non-Hispanic Blacks who currently smoke less likely to receive optimal treatment than those who do not smoke. 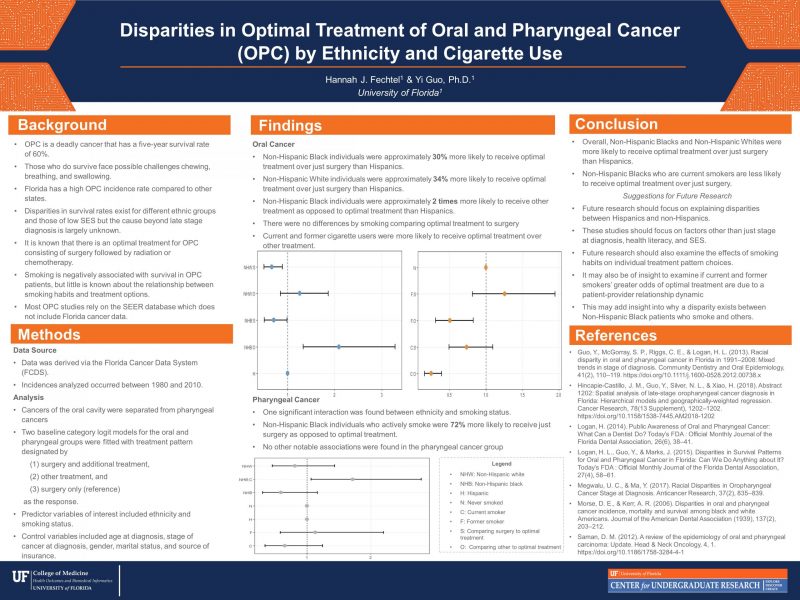 You did a great job explaining the importance of the data and your poster looks fantastic!

Thank you for your feedback!

Hannah, I think your work is incredibly important! Health disparities is a prominent issue in our healthcare system, and I think your examination of the demographic inequalities of oral and pharyngeal cancer treatment is one of the first steps in correcting theses disparities.

Thank you for your comment. I agree: Any work put towards understanding and eliminating disparities is worth it.