Mutations in the DNA methyltransferase 3A (DNMT3A) are recurrent in acute myeloid leukemia (AML) and associated with poor prognosis and a higher chance of relapse. Most DNMT3A mutations are hotspot substitutions affecting arginine 882. Structurally, this impairs DNMT3A oligomerization, yet the effect on the protein-protein interactions largely remain unknown. We hypothesize that mutant DNMT3A participates in altered protein-protein interactions distinct from wild-type DNMT3A, leading to aberrant biological functions. Our goal is to characterize these altered protien repertoires using proteomics approaches. However, robust purification of the DNMT3A-containing protein complexes is hindered by the lack of high-quality DNMT3A-specific antibodies. To overcome this, we employed a molecular engineering approach to generate C-terminal epitope tagged versions of wild-type and mutant DNMT3A suitable for immunoprecipitation. We have now successfully appended HA epitope tags to DNMT3A WT/MUT open reading frames (ORFs) cloned into a retroviral mammalian expression vector. Next, viral packaging was optimized by comparing three helper systems using GFP-expressing viruses for easy visualization. The Ψ-eco system was chosen to package HA-tagged DNMT3A constructs and transduce 32D normal mouse immortalized myeloid progenitor cells. Next, we will verify the expression of tagged proteins by Western blots followed by co-immunoprecipitation and mass spectrometry to assess the multi-protein complexes. 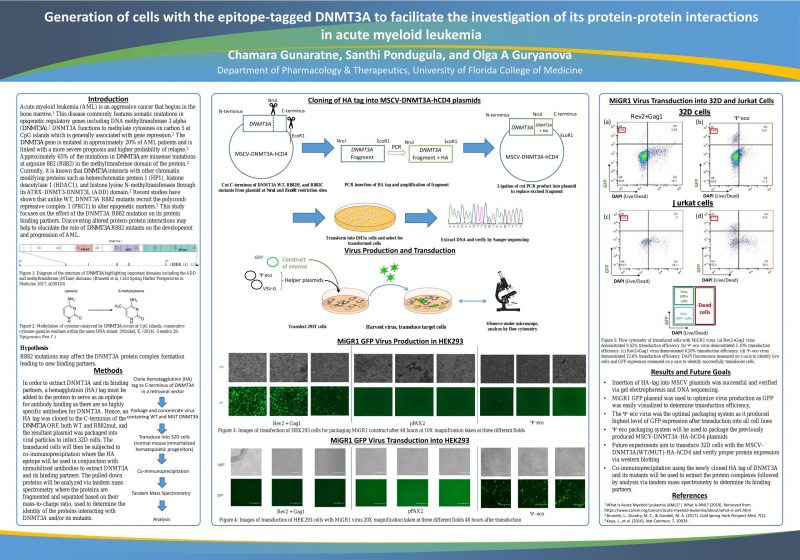 Hey Chamara! Great job presenting and really interesting work. I have worked in the past on research projects studying the effects of certain anti-cancer therapies on the methylome, and so I understand the great role that methylation can have in tumorigenesis. That being said I greatly appreciate and applaud your investigation of DNMT3A in AML!