As ectotherms, the melanin present on monarch butterflies’ wings may help with metabolic processes and the absorption of heat. Studies under controlled conditions have shown that melanin development in lepidopterans is influenced by the ambient temperature of their location of origin. In this study, two primary analyses of wild-caught specimens took place: a Florida resident vs. migrant analysis wherein the amount of melanin in Florida-born monarchs was compared to monarchs born outside the state, and a broader analysis wherein melanin counts of monarchs collected from Mexico and Canada were considered in the context of the latitude of their natal origin (inferred from stable isotope analysis) to see if there is a relationship between latitudinal origin and melanin quantity. Amounts of melanin from females and males were also compared. Neither analysis showed a statistically significant relationship between the origin of the specimens and their respective melanin amounts. However, there were significant associations for three out of the total four landmark melanin count comparisons between the sexes. Climate change homogenizing the temperatures of the North American continent could be a pivotal factor in explaining why there is a lack of correlation between monarch origin and melanin count data. 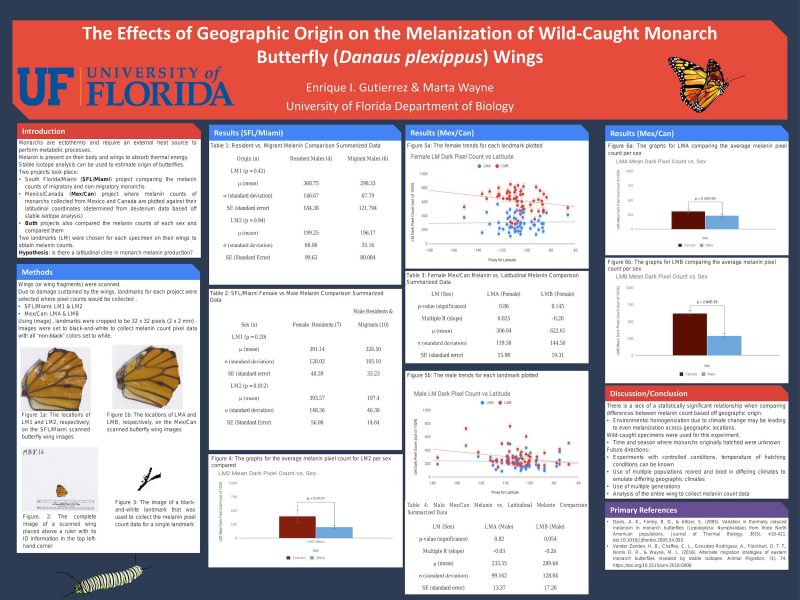