According to the CDC, 93.3 million adults in the U.S. are affected by obesity. Adenylyl cyclase 3 (ADCY3), an enzyme that catalyzes the formation of cyclic adenosine monophosphate (cAMP) downstream of several G-protein coupled receptor (GPCRs) signaling pathways, has been implicated in regulating feeding behaviors in humans and rodents. Within the brain, ADCY3 is predominantly localized to the neuronal primary cilium, a microtubule-based organelle that projects from the cell surface and contains several GPCRs for modulatory neuropeptides. Here, we show that a novel Adcy3 mutation resulting in deletion of the c-terminus of the protein leads to severe obesity in mice. Using immunohistochemistry, we show that ADCY3 is no longer detectable in neuronal primary cilia. Mutant mice show significantly increased body weight compared to heterozygous and wildtype littermates. Using open field testing we found that locomotor activity was reduced in mutant mice, along with resting respiration rates. However, at 14-16wks of age, mutant mice don’t show differences in food consumption, or preference for sucrose. Further testing will investigate behavioral changes in mutant mice prior to the onset of obesity. This model presents an opportunity to dissect the role of ciliary localization of ADCY3 in activity and feeding circuits. 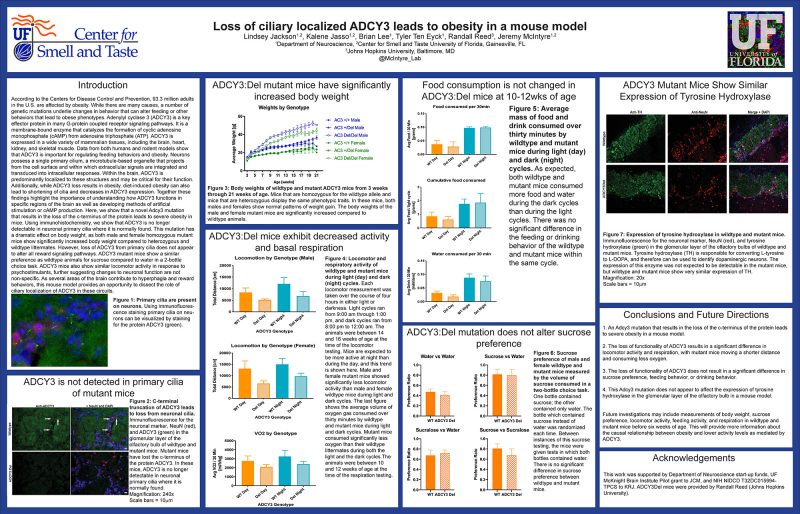