Traumatic brain injury (TBI) is a major epidemic known as the aftermath of a large force exerted on the head. In the U.S., the vast majority of TBI cases are classified as mild TBI (mTBI). A primary method to diagnose mTBI is computerized tomography (CT) scans; however, the scans lack the sensitivity to detect more subtle forms of brain injury. Thus, there is an apparent need for a quick, biofluid-based diagnostic test for mTBI. The present study develops an ultra-sensitive assay to test for ubiquitin C-terminal hydrolase-L1 (UCH-L1), a protein mainly found in neuronal cell body cytoplasm, as a biomarker. Previous literature suggests that UCH-L1 is released from injured neurons and then enters cerebrospinal fluid (CSF) following CNS injuries and neurodegeneration. The methodology entailed screening various antibodies to determine a successful capture and detector pair, optimizing the conditions (i.e., diluent type and antibody concentrations), and then testing the CSF, serum, and plasma samples from rat, mouse, and human subjects. We conducted the analyses in the order of Western Blot, regular sandwich ELISA protocol, MSD high-sensitive homebrew ELISA development, and Quanterix ultra-sensitive homebrew ELISA development. The study proved that participants with TBI showed increased levels of UCH-L1 in their CSF. 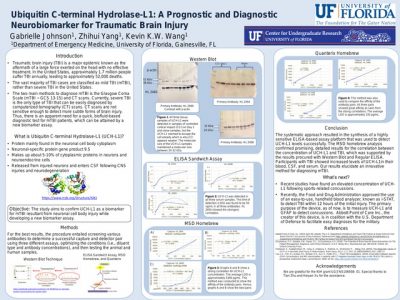 Hello everyone! Feel free to leave any questions or comments 🙂

Hi Gabrielle! Great video, and poster. What would be the next step for integrating this method of diagnosing mTBI?

Hi Julia! Great question! So right now we are still doing assays with the Quanterix instrument to determine what is the absolute lowest limit of detection that the machine can find the UCH-L1 in CSF. We have only tested the assays in CSF, though. After the lowest LOD is detected in CSF, we want to see if UCH-L1 can be detected in blood and plasma levels since those samples are more realistic to collect than CSF for patients. However, the opposite effect would be observed since according to our hypothesis, most of the UCH-L1 should be in CSF and little to none should be seen in the bloodstream.

Very interesting work Gabrielle! I wish you the best on future endeavors with your project!

Thank you so much, Alejandro! Good luck with yours as well!