Up, Up...In the Air: The Symbolism of Nationality and Globalization in Superman’s Allegory

This project explores American nationality via in-depth readings of the literary and scholarly canons of Superman. Much of my analysis will outline how multidisciplinary scholars from 1978 to present-day have interpreted Superman as an essentialized allegory of Americana: a celebratory figure of American nationality and individuality. Yet by ignoring Smallville–Clark Kent’s hometown—this scholarship has misinterpreted the socio-cultural relevancy of America’s first superhero. My close readings of Superman canon’s iconic narrative elements—Superman’s powers, kryptonite, the Fortress of Solitude, Superman’s suit, Metropolis, and Smallville—will explore the lost connections between Superman’s Kryptonian and Clark Kent’s Smallville personalities. For much of Superman’s publication history, the character was unable to reconcile his Kryptonian and American identities—as seen through the latter’s stunted development in comics and films, in addition to its scholarly disregard. Through the insertion of Smallville into Superman’s allegory, the superhero becomes representative of the United States’ struggles with national identification in the face of globalization and increased world power. By forgetting Smallville, both Superman and America gave into their anxieties and disavowed the roles their complicated histories play in their developments of the future. 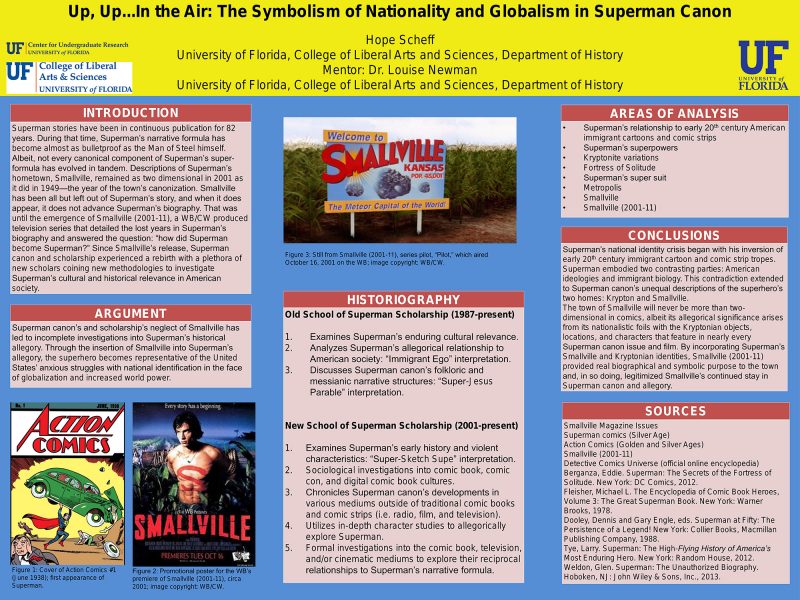