Mating plugs have been used by males in many species to prevent female re-mating and sperm competition. One of the most extreme versions of mating plugs is the sphragis, which is a large, complex and externalized plug found only in butterflies. This trait is widespread within the genus Acraea (Nymphalidae) and provides an opportunity for investigation into the effects of the sphragis, on the morphology of the genitalia. Our investigation aims to document morphological differences in Acraea genitalia between species that produce or do not produce a sphragis after mating. Using specimens from museum collections, genitalia dissections were conducted on 19 species of Acraea, 9 sphragis bearing and 10 non-sphragis bearing species. Genitalia imaging was performed for easier comparison and analysis and measurements of genitalia structures was done using ImageJ software. We found that there are some distinguishing morphological characters in the females and the most obvious difference is the larger and more externalized copulatory opening. We believe that these differences are due to a sexually antagonistic coevolution between the males and females, where the females evolve externalized genitalia that are more difficult to plug, and the males attempt to prevent re-mating with larger mating plugs like the sphragis. 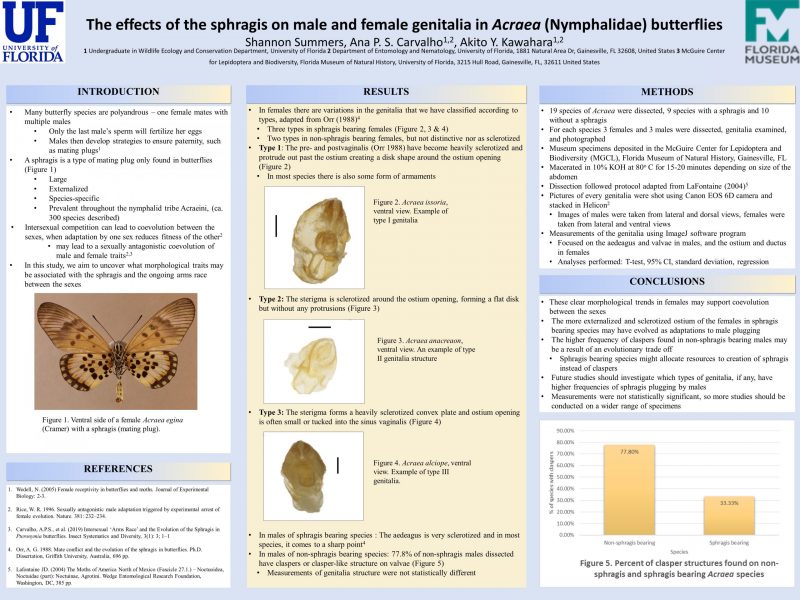