In this project, a virtual model based on CT images of a physical proton tissue-equivalent anthropomorphic phantom is presented. This computational model will be used as a physical phantom surrogate in Monte Carlo (MC) simulations of radiation treatment in Proton Therapy. In previous work, a 10-year-old physical model of proton tissue-equivalent material was constructed. Based on CT imagery of the model, segmentation of the skeleton, lungs, airways and outer-body contours was performed in 3D-Slicer. Segmented objects were then exported as polygon meshes, which then were checked for self-intersections, mesh-mesh intersections and normal vector directions using SpaceClaim. In order to assess organ doses when performing MC simulations with the model created, 10 reference organs were inserted within the computational model created using the software Rhino. For each of the organs inserted, aforementioned intersections were checked and fixed. The model was then converted into a tetrahedral mesh model for future MC applications. This model created is an accurate computed version of the physical proton tissue-equivalent anthropomorphic phantom. Future MC simulations will be conducted using this virtual model to assess out-of-field organ and point doses and compare with the out-of-field doses obtained from proton irradiations of the physical phantom. 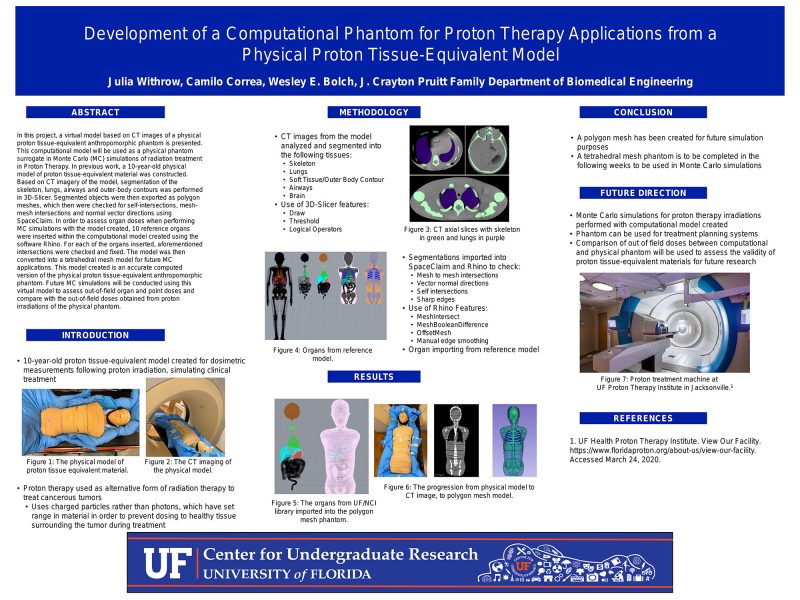